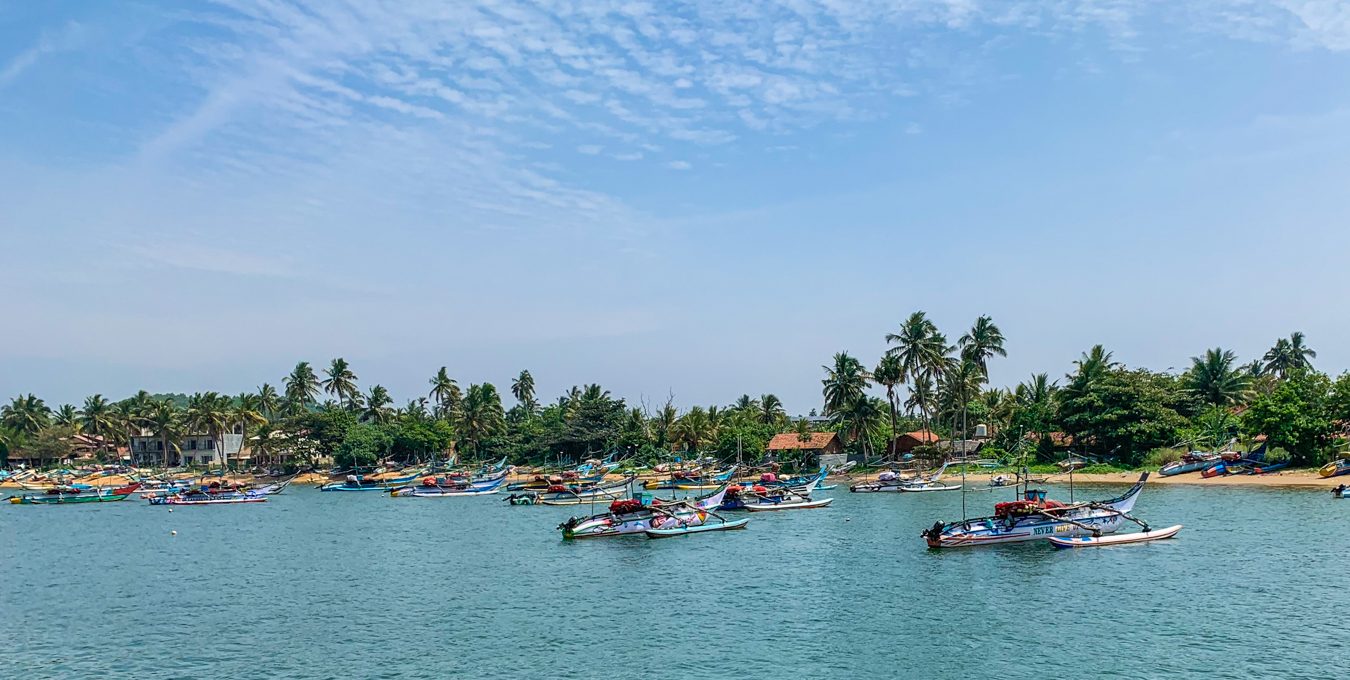 We started in Colombo our 2 weeks journey through Sri Lanka. We stayed here a bit more than most visitors do, as we also needed to sort our some administrative stuff to rent a car and get the Sri Lankan temporary drivers permit for tourists. We were also traveling here with a young kid and needed some flexibility for his schedule too.

There is not much to do here and I would not advise for more than 2 days, especially if you visit Colombo with kids. It is quite crowded, noisy and polluted. But it would be a huge mistake to consider all Sri Lanka is like this!

We chose to stay in the city center, close to Beira Lake. This is a very convenient and safe location. You can walk around to the main touristic places and a tuk-tuk ride to Gale Face or Fort area is very cheap too. 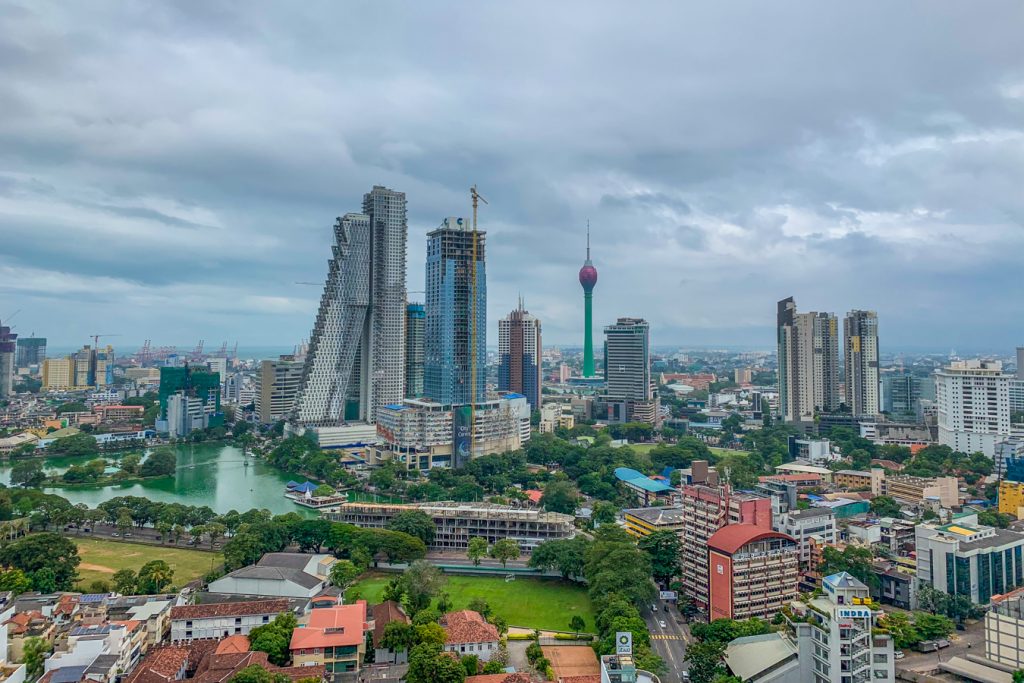 Our recommendations, after visiting Colombo with a toddler, are:

Where to eat in Colombo

We were a bit afraid about eating options in Colombo, after what we’ve read. Especially since we were visiting Sri Lanka with a toddler, as kids tend to be picky eaters and prefer to have familiar food. But we found some awesome options to eat in Colombo:

We left Colombo heading south, towards Mirissa. We chose this location as we were no looking for beach time, but for a trip to see the whales, which is the main highlight of the area. Very bad decision! Mirissa was the only place we did not like in our whole journey across Sri Lanka. 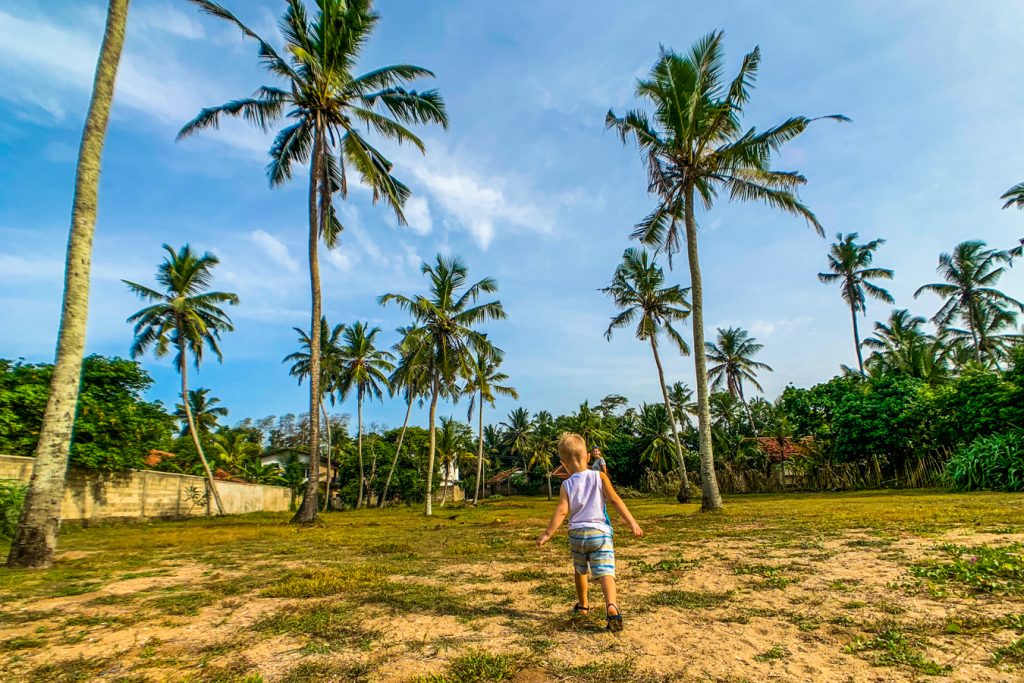 First, I thought we were just unlucky. But then we spoke with a few more people visiting the area and taking whale watching tours. They all had the same experience. Not a singe person encountered on the see more than dolphins or some small dolphin-like whales (false-killer whales). Everybody heard similar stories from the organisers: “we just saw one blue whale yesterday”, “for the last few days there are migratory whales in the area and larger ones moved further than their usual locations”, “our friends told us on the radio that larger whales were spotted further away but it will take a few hours to get there” and so on.

I am not absurd; whales are wild creatures and the area where they live is very large. I don’t expect the tour organisers to know the blue whales exact location all the time. But the way Mirissa whale tours are advertised creates a false expectation that it is extremely likely to see blue whales, which I doubt it is true. 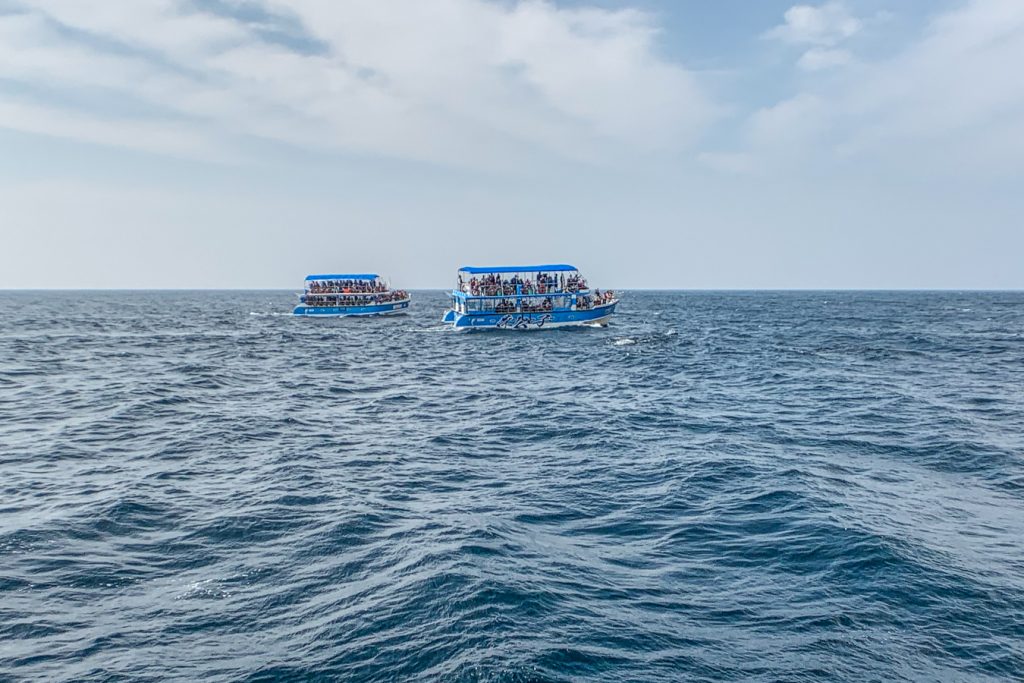 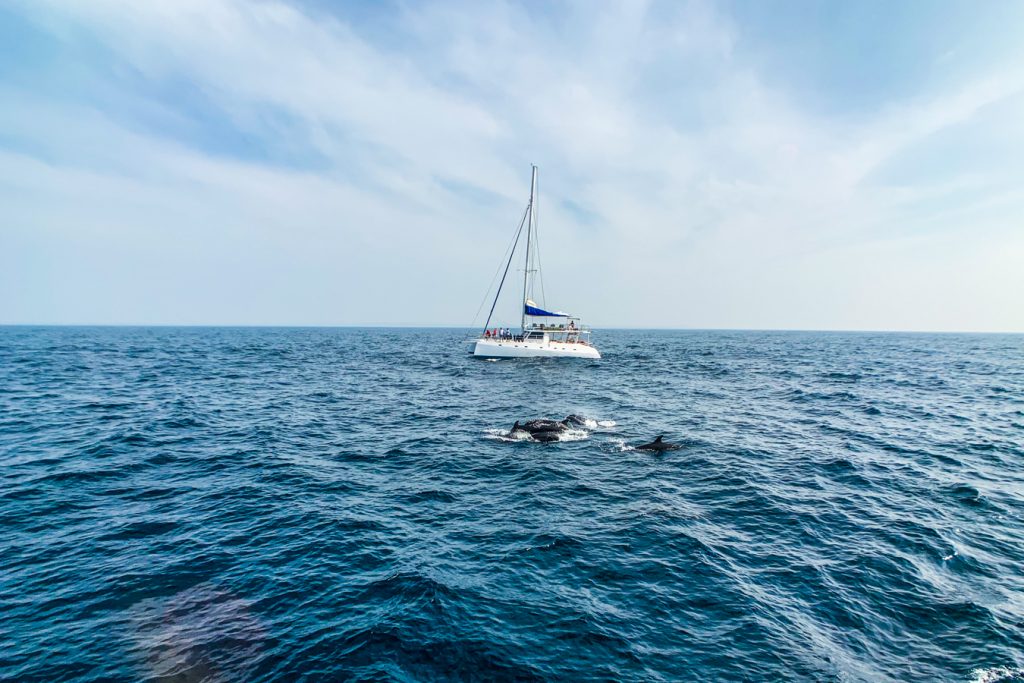 Maybe a longer, private tour would be interesting and more successful in spotting the large creatures. But I found the popular tours to be a waste of time and money. We were on the boat before 7 in the morning and got back around 11, just to stay on very uncomfortable seats and see a few dolphins for 15 minutes!

Apart from the boat tours, Mirissa has some decent beach options, even though the Indian Ocean was quite rough in this area. Actually, Sri Lankan coast is a well known destination for surfers! If you are looking for some lazy sunny days, I would recommend Weligama, that seemed quite nice as we were passing by. I also heard great things about Unawatuna or Bentota beaches. 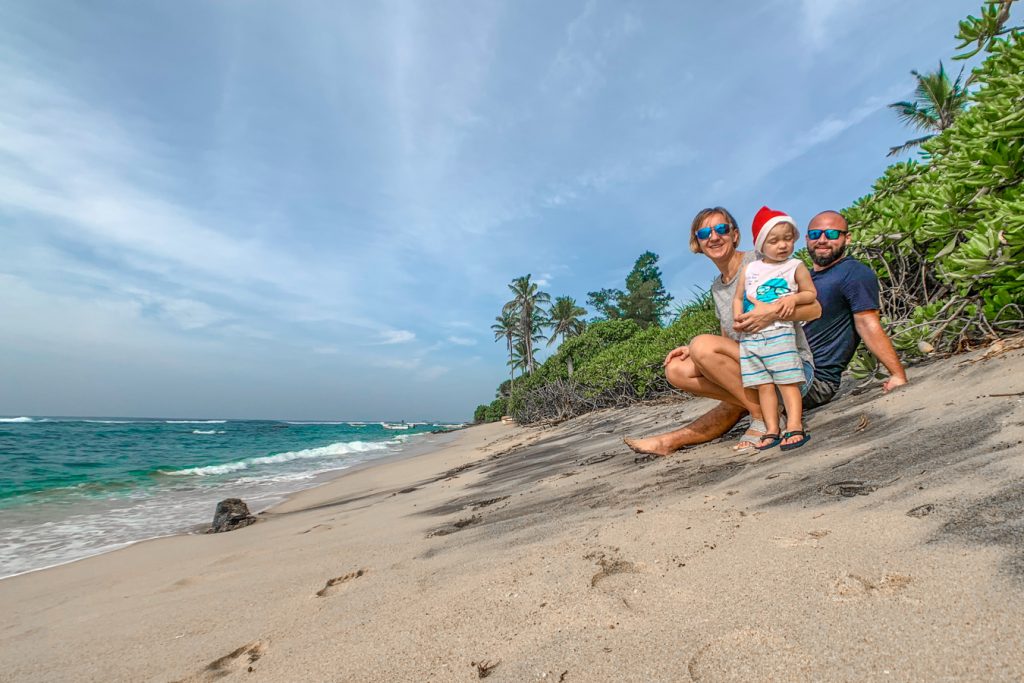 Sri Lanka is well known for its tea production. You wonder that Ceylon, its former name from the Imperial times, it is also one of the most well known tea brands all around the world! The large tea plantations are located in the hill country, in Sri Lanka’s central region. But we were told the traditions are much better kept in the south! 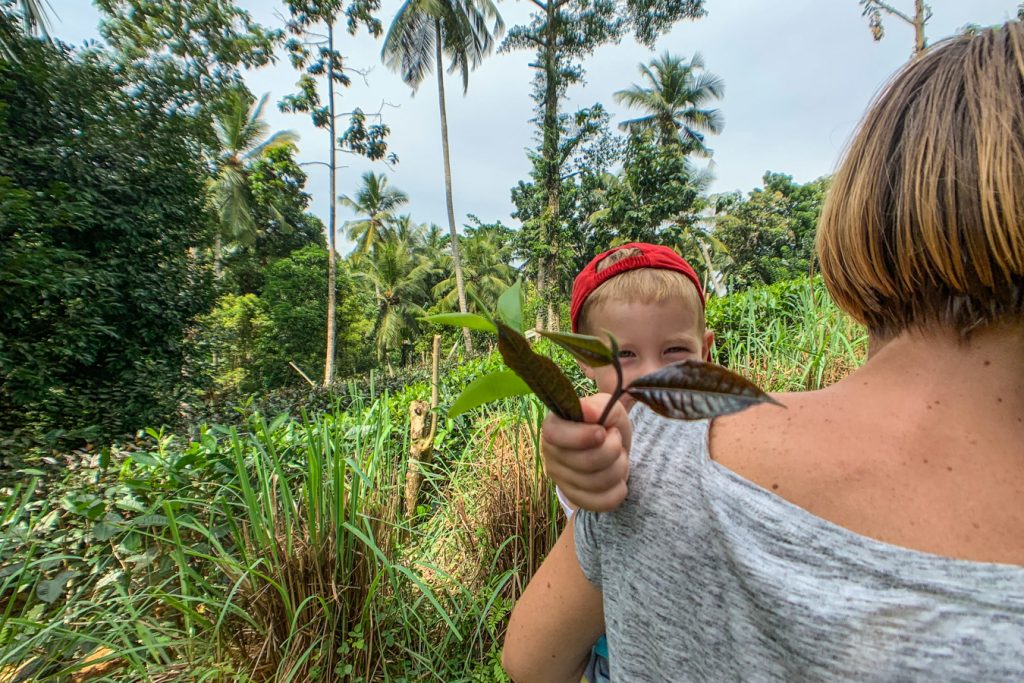 One of our guesthouse hosts advised us to visit Nandana Tea factory on our way north from the coast. We got there around noon and joined a tour hold by the owners, a very friendly old couple. We learned a lot not just about tea, but also about spices, herbs and tropical fruits which are typical for Sri Lanka. I loved to see how pepper grows, to smell cinnamon leaves or to find out how cloves really look like. It was a great lesson for the whole family! Then we entered the tea processing unit, where we were explained the differences between different types of tea. All ended with a tasting, where we tried 7-8 different types of green and black tea. I can honestly say it was the best tea I’ve ever had, much more pure and flavoured than anything I’ve had before! Too bad our luggage was too full, so we could buy just a small pack of our favourite mix. 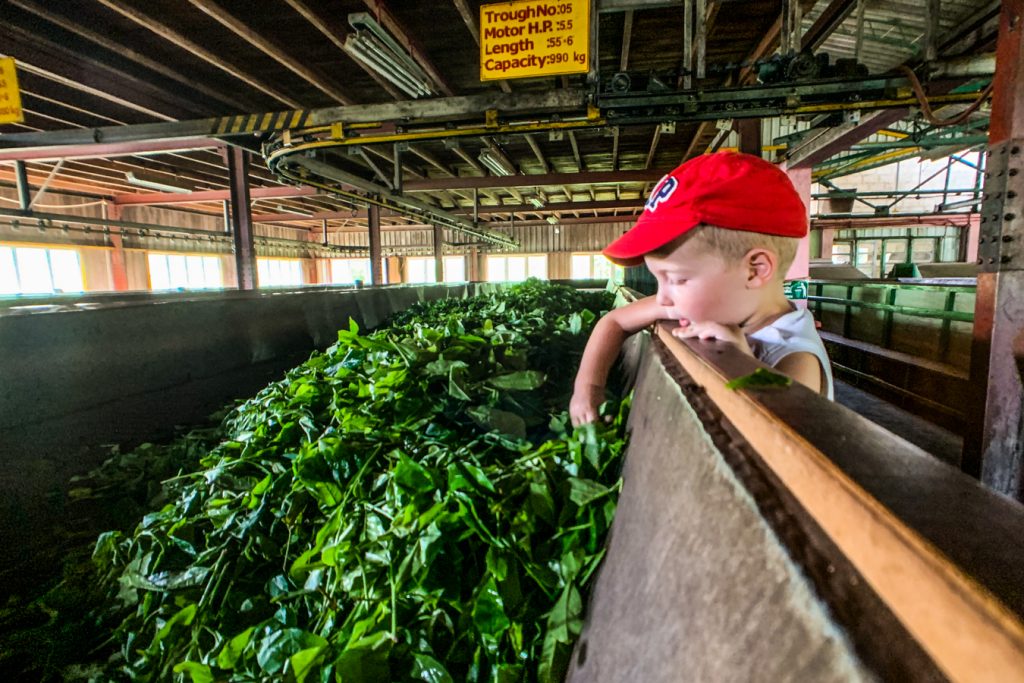 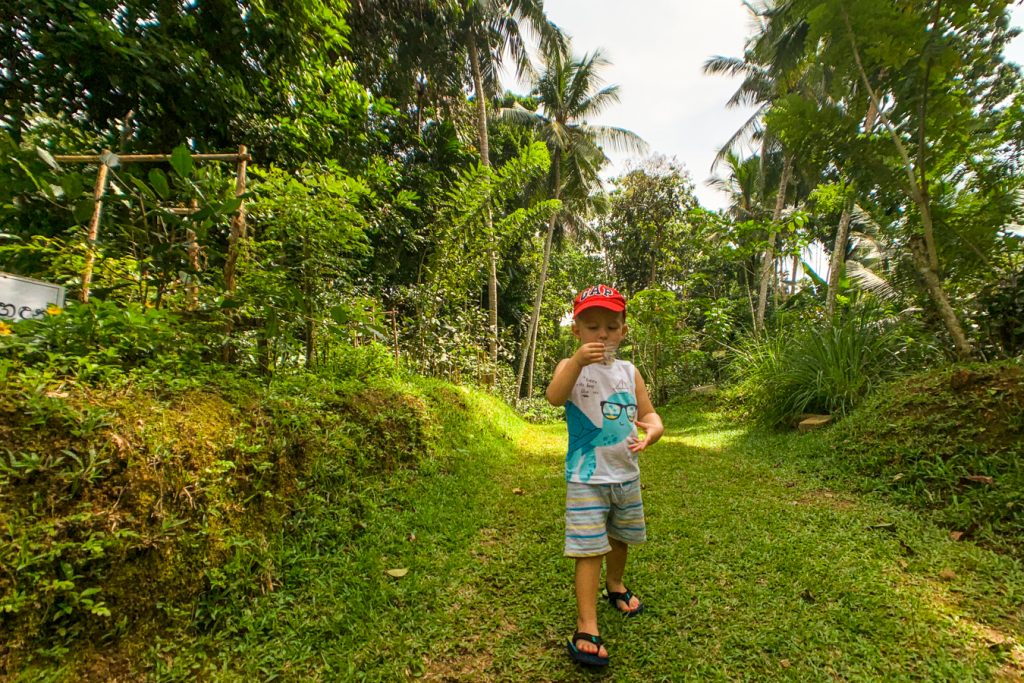 You can’t visit Sri Lanka without taking a safari in a national park. There’s plenty of options to choose from, as the island hosts 26 national parks, which represent more than 8% of its total surface.

One of the highlights of our trip was seeing the Sri Lankan elephants in Udawalawe National Park. Actually, Eric kept singing a well-known Romanian song “One elephant…two elephants…” for a few days and still mentions the safari with great enthusiasm. Can’t wait to go together in a African safari to see the migration in a few years! 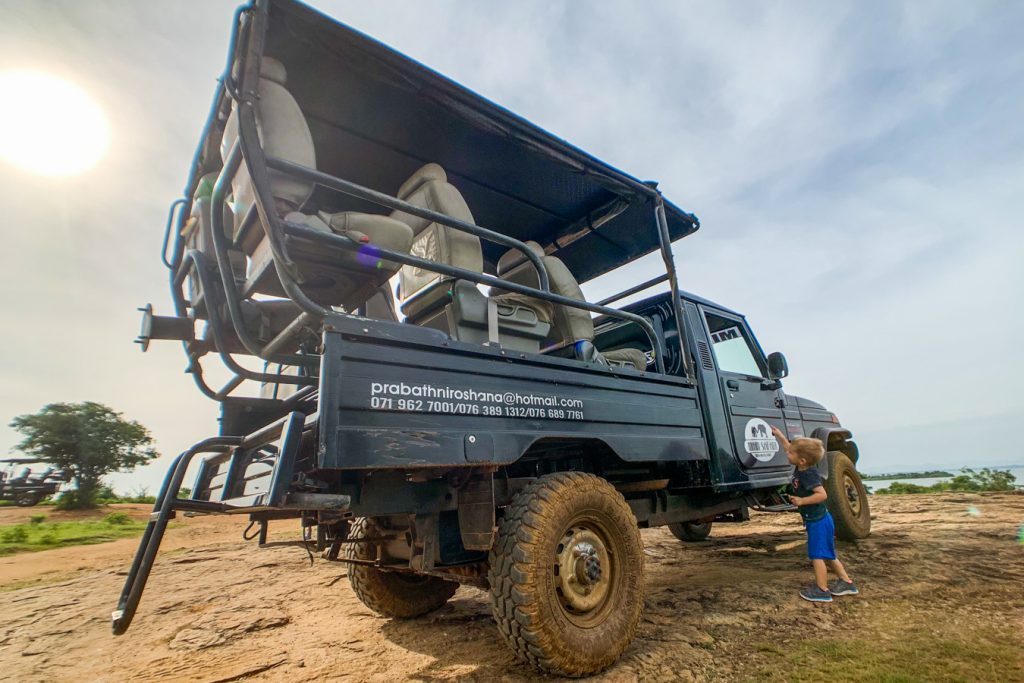 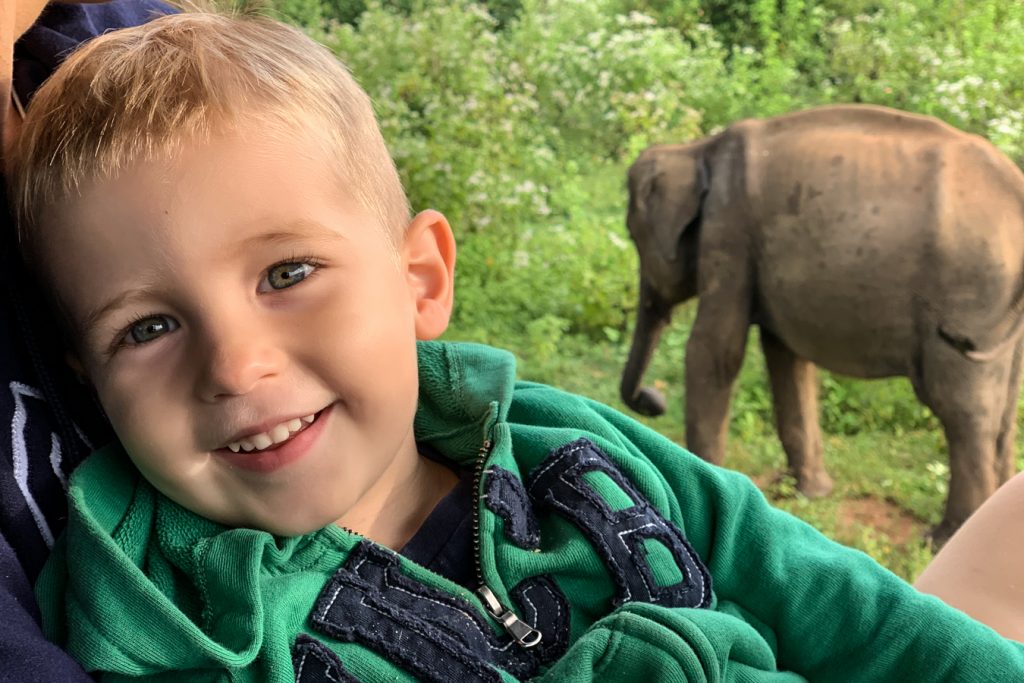 I chose a safari to Udawalawe as its location was very convenient for our route, but also because of its large elephant population. It is almost “guaranteed” to see the large mammals in their own habitat. We’ve encountered more than 20 of them, young males walking around, small herds of females and babies eating or adults bathing in the Udawalawe reservoir. We’ve even seen babies as young as 3-4 months old!

Most of the accommodations in the area are either organising safari rides or work with safari companies, so you can book your tour on the spot when getting there. A safari with kids is better to be done early morning, but there is also the option to go in the afternoon. 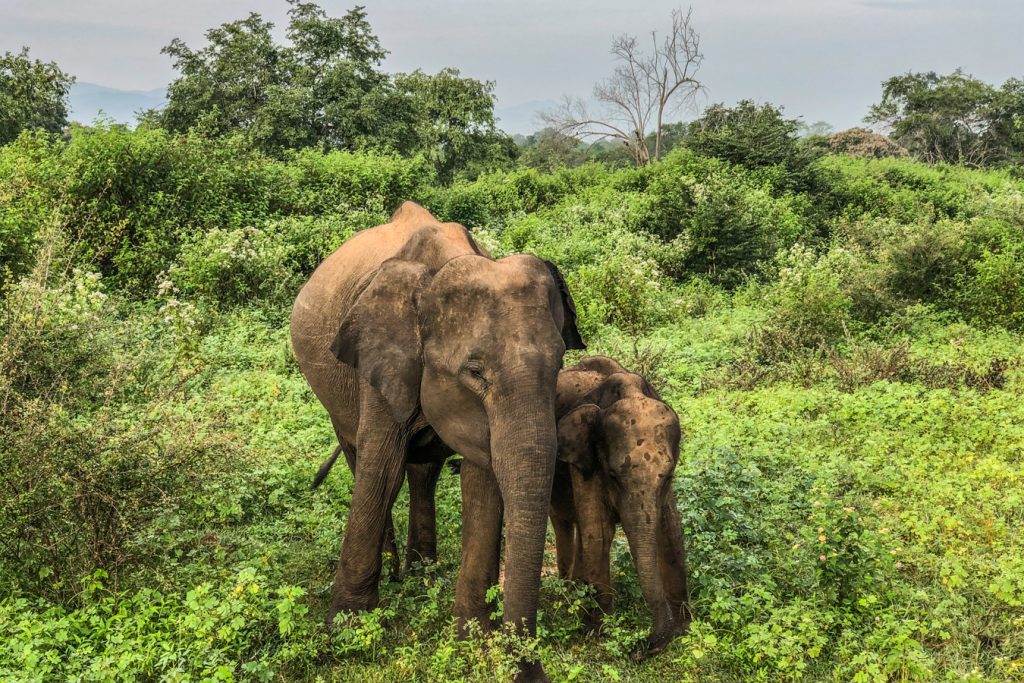 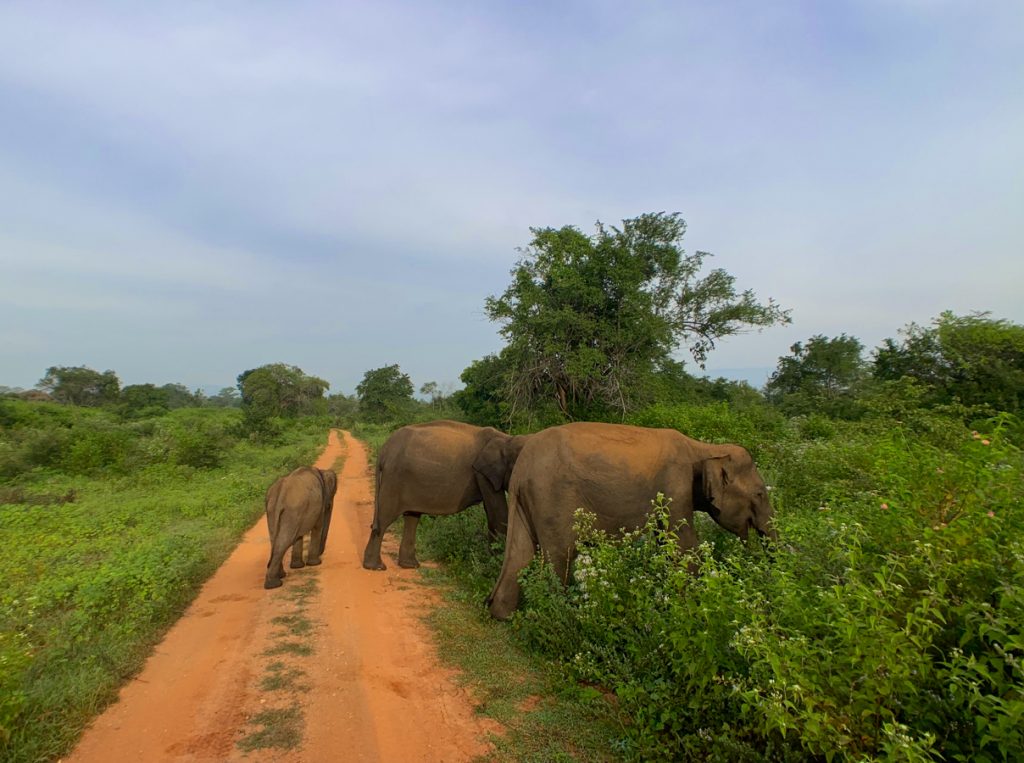 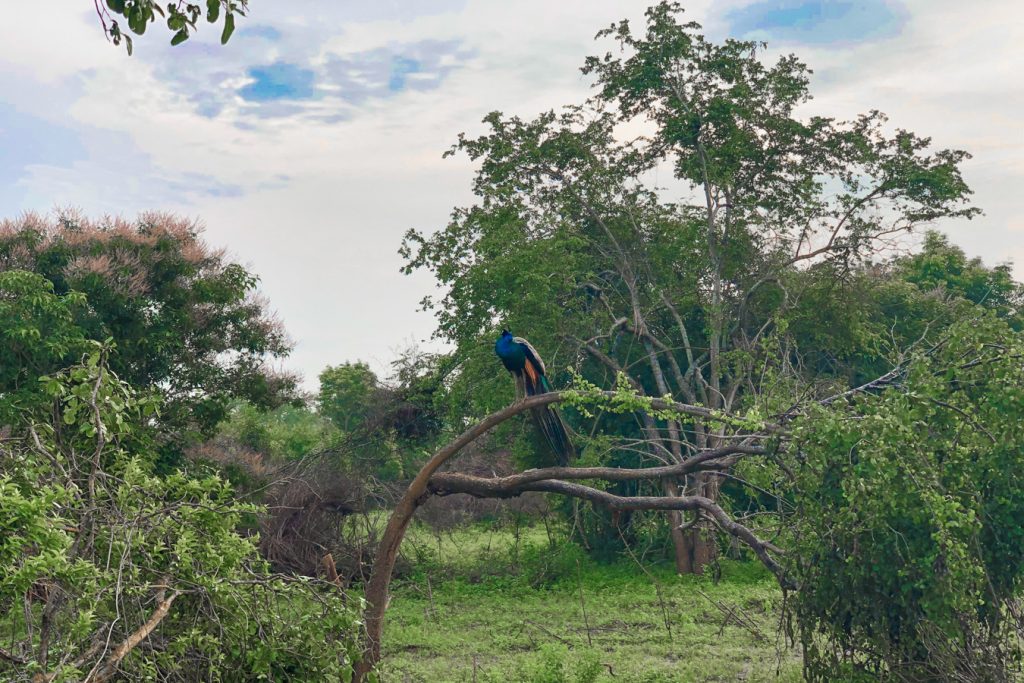 This was the first part of our adventure around Sri Lanka. Stay close for the next one, where we were road tripping through tea plantations in Sri Lanka’s hill country. 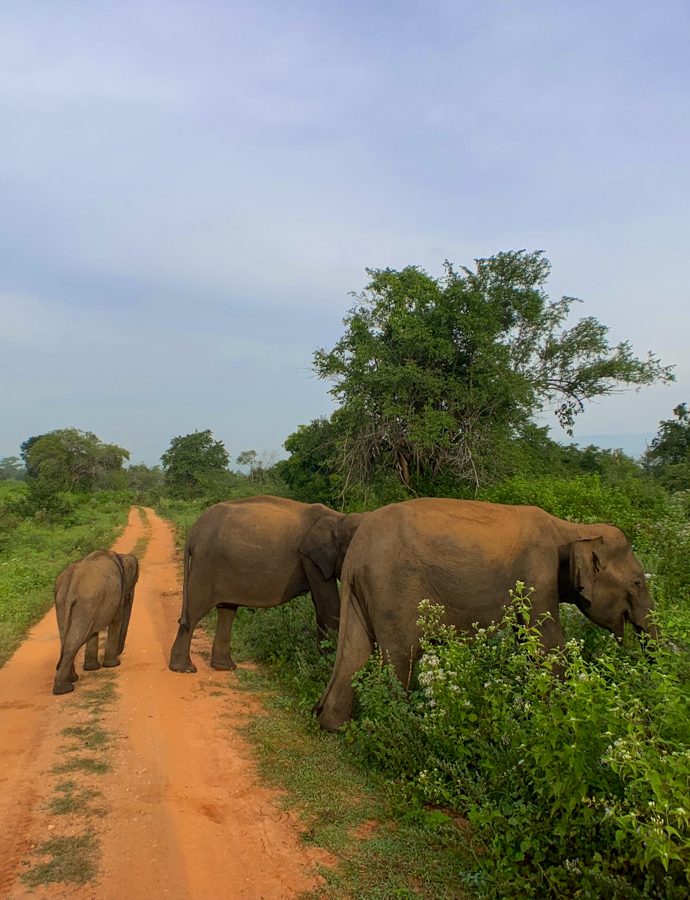 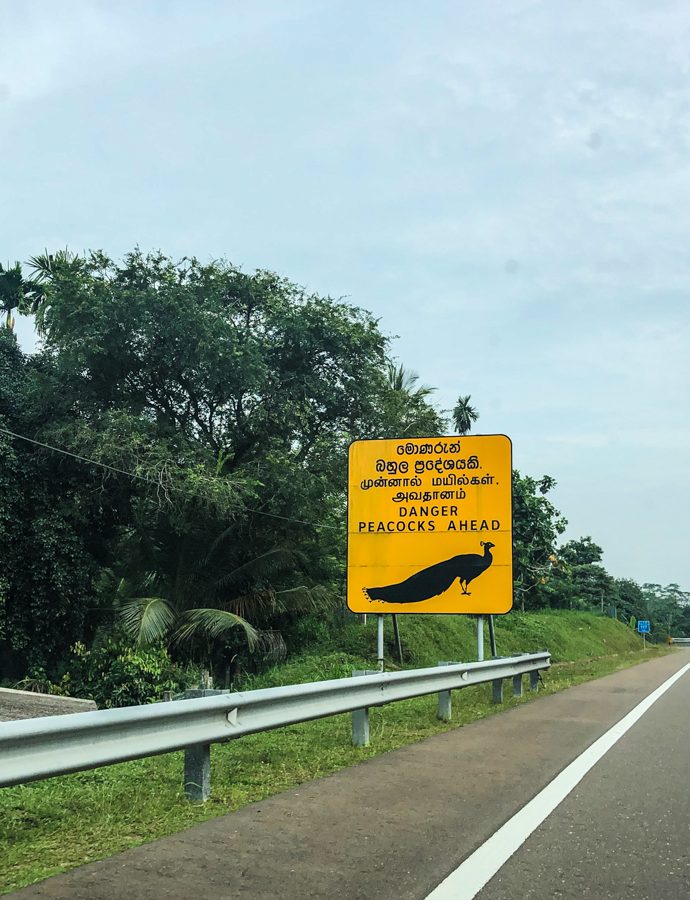 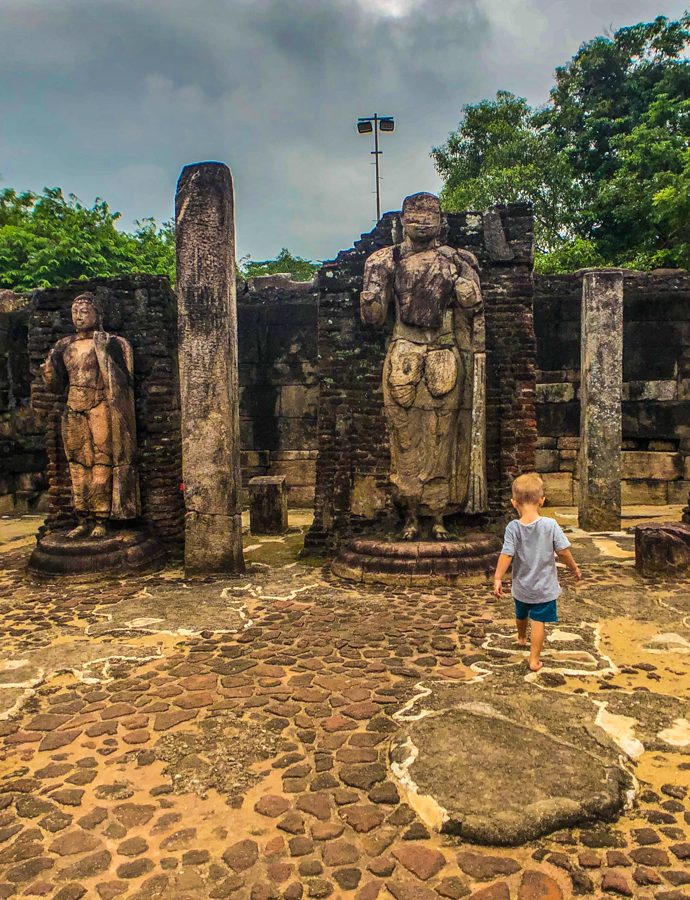